Well the title kinda says it all and The Pantless Anime Blogger was even nice enough to write an intro for me so WooHoo!!!

So a quick recap, I lost the Winter Games 2018 and I must now face penalty. I’m sure this is more a positive to me though, since I can whore out my blog, but Irina, the winner of the games, insisted I do this instead. The penalty is supposed to be watching and reviewing a really awful anime, but she was merciful. She, instead, wants me to write about Natsume. I’ve only ever seen the first season, because I watch a lot of things, but it did struck a chord with me. I have four favorite female characters: Chihaya from Chihayafuru, Mix from Aquarion Evol, Nadeshiko from Yuru Camp (thank you Winter Games), and a one-shot character from Natsume. It’s weird, right? What makes a character that only appears in one episode so appealing that it is lumped with Chihaya? I don’t know either, but it’s a good chance to finally explore that reason.

I’m talking about Tsubame. She is a sparrow demon that appeared in the first season of Natsume. She asks for his help to be reunited with a man that once helped her when she was a sparrow. In order to move on, she wanted to properly thank the guy, and Natsume is the only person that can help her. I saw Natsume in a very vulnerable moment in my life but, when I re-watched the anime, my feelings for Tsubame is still very strong. Why is it? Let’s figure this out together.

Approaching this at the subliminal level, I do believe it’s Ryouko Yuzuki’s portrayal of the character that grabbed my attention. She has done a lot of motherly characters throughout her career, and I think she gave some of that energy in her performance of Tsubame. Given the calm aesthetic of the anime, her soothing nicely compliments the atmosphere. The more she talks, the more I am drawn in. To be fair, the anime itself has a “hush” level of tone that even Natsume emulates. If you close your eyes and listen, even Nyanko-sensei’s voice comes off as calming. I think the reason why I love Tsubame personally goes a bit deeper.

This anime utilizes the theme of “longing for someone”. This feeling is expressed through some heart wrenching emotion of loneliness and regret. I don’t remember much about the show, but the one story that really captures this theme is that one about the shrine god. No one visits his shrine, except for a girl. This god is losing his power, soon disappearing, and the girl is the only keeping him alive. At the end of the episode, the god has expressed regret that he never got a chance to thank the girl despite the many opportunities to do so. When the girl died, she became very old, the two was reunited in a dream-like scene that evokes sadness and regret. This anime amplifies our feeling of isolation and makes something beautiful out of it. Tsubame is very different though.

She always smiles and radiates happiness. A lot of the characters in Natsume longs for their other half, the important person in their life, or that one special person that makes the entire thing worth it. The longing is strong that it highlights their isolation. Tsubame carries not longing, but a hopeful ideal of reunion. She doesn’t feel isolated, instead she feels grateful. She is very much content despite her heavy longings for her special person.

She’s such an odd character for this anime. Others would kill themselves for a reunion, and others would cry in the things they weren’t able to do. Tsubame does neither. She just waits, and she just believes that her feeling of longing will most definitely be answered by an inevitable reunion.

3. Her Relationship with Natsume

Now don’t get me wrong. Her story is still sad. When she reunites with the person that saved her, the other person doesn’t really see her. Only Natsume can see her, and it was heartbreaking to see her light up, so happy, only to be unanswered in return. She waves good bye to him, and she was satisfied with the meeting. Natsume wasn’t though.

I do believe Natsume meeting Tsubame changed him a lot. The reason Tsubame is such a gentle creature is to make Natsume ponder about his own life. He grew up hating his power, and yet here is Tsubame showing utter content despite her unreciprocated gratitude. Given that Tsubame is also not in the Book of Friends, this was the first time Natsume met such a yokai. She was warm, caring, friendly, and she never asks for the unreasonable. Most of the yokai Natsume meets are ghouls that want to eat him or want their name back. Tsubame is an anomaly of a character. She’s such a strong figure in Natsume’s doubtful time that our pretty boy himself went out of his way to make her happy. For once, he didn’t see her as a ghoul or a spirit, but a kindred soul that knows loneliness and now deserves to be happy.

Natsume: Tsubame, thank you for not hating people.

Tsubame: I love kind people! I love warm people, too! That’s why I love people! Natsume-sama, thank you. Thank you! I guess this one is a bit personal. I kinda grew up in a broken family, and the one person that cared for me also suffered deeply. I grew to hate relationships, meeting people, and being in crowds. I learned at a very young age that when you fall down, no one will be there to help you back up. I grew not trusting people, not letting anyone in my life. The entire family kinda went on like that, each of us broken and damaged. When I decided to take my life back and make something of myself, I met my mentor. She loved people, and she always puts on a caring smile. I’m severely introverted back then, but she gave me a chance. I’m teaching kids to learn how to trust now, because someone also taught me that it’s possible. Now, I’ve seen my mentor betrayed, back stabbed and slowly lose her passion, but her trusting nature never fades. I don’t share my accomplishments, but she would always approach me first. When I passed my license exam for teaching, last year, she actually called me first and congratulated me. She shared the news in her facebook, and she told the world that I passed, that I succeed in life, and she was very proud of me. She loved people, because they’re kind. They’re warm, and they earnestly strive for what they want. I see this soulful person in Tsubame. 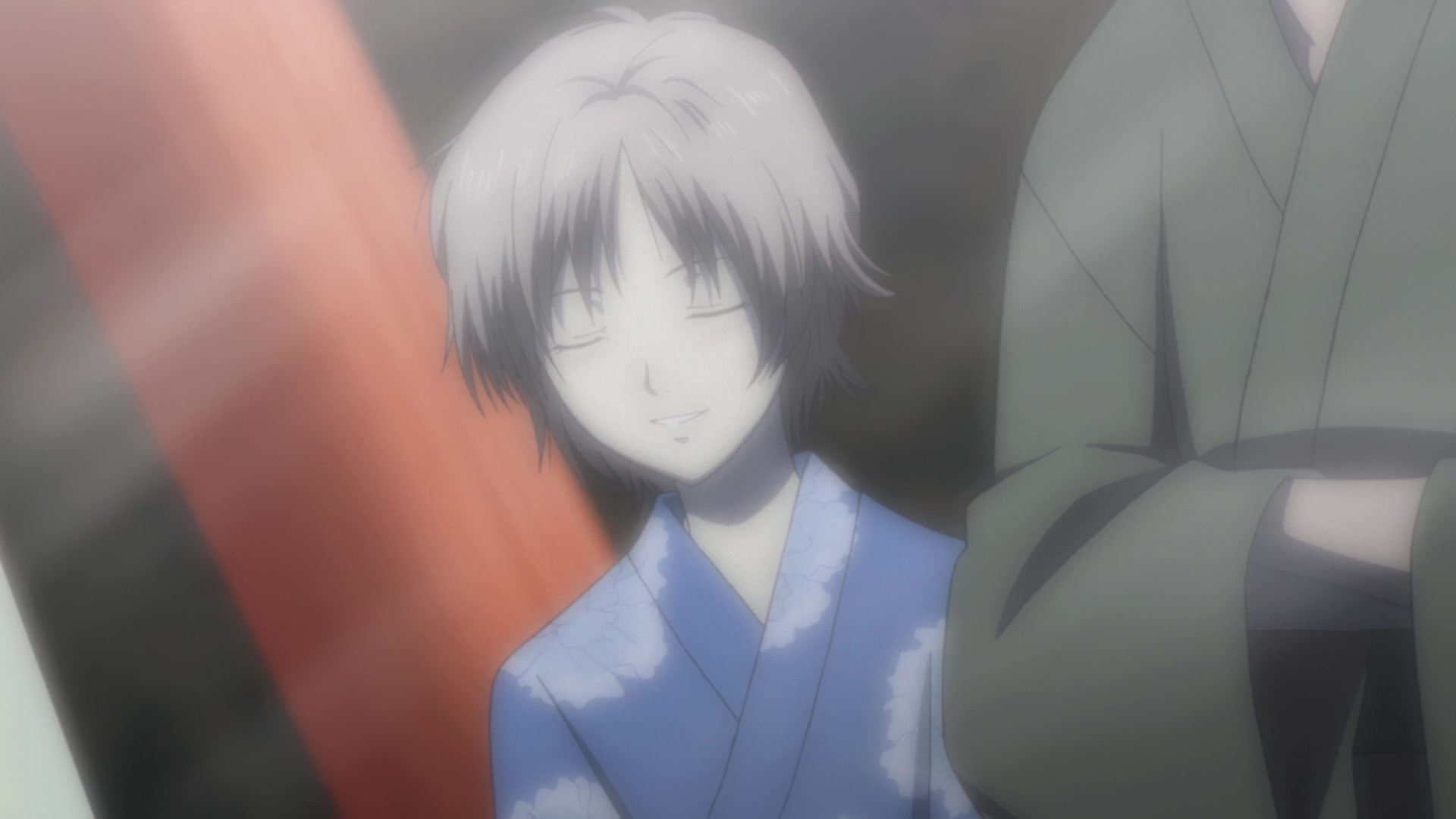 The episode ends with Natsume meeting the person that Tsubame wanted to meet. He asked if the guy saw Tsubame, and he showed Natsume a photo of both of them.

I wrote this post after re-watching the episode, and I still cried. Damn it Tsubame, I love you.

This was lovely, I quite like Tsubame too although I have a real soft spot for Hotaru myself… But I really enjoyed this post, thank you so much for writing it TPAB!

Do You Like Characters Which Are Relatable or Remarkable?

Re:ZERO Season 2 Part 2 Episode 49: The Fall of the House of Mathers — Crow’s World of Anime

Where are all my Anime Transboys at?

The Garden of Sinners Chapter 3: ever cry, never life. (Remaining Sense of Pain)