English versions of anime have gotten exponentially better over the past few years. The quality of English language voice acting is almost incomparable to what it was, making it possible to watch dubbed anime without loosing anything in the experience. The difference is really remarkable.

Similarly, subtitles have come a long way. Sure, you still get some stilted grammar occasionally and there are some classic and very common Japanese expressions that sound odd when you’re not an anime watcher, but for the most part, you can rely on accurate and well edited translations. This is great news for us English speaking fans. I suspect that a lot of classic series are really much more profound and interesting than their translations would have you believe.

We do however lose a particular type of magic in the trade off. The Engrish littered dialogues that went from baffling to seriously hilarious have provided me with countless hours of entertainment regardless of the actual anime they were from. Occasionally the stars aligned, and you would discover an absolute gem of poorly translated rubbish that would completely captivate you for an afternoon.

Some of you may be too young to have ever known the absolute treasure trove of creative translations that were fansubs, but let me tell you, they were a delight! Try to imagine an amateur with no translation OR writing experience or training trying to adapt an episode to an entirely different language. Sometimes these brave souls didn’t exactly speak Japanese, but they really liked the pictures and it seemed interesting. Sometimes they didn’t quite know English, but they enthusiasm would breach the language barrier as they tried their hardest to use ALL THE WORDS. At the best times, they didn’t understand either language! 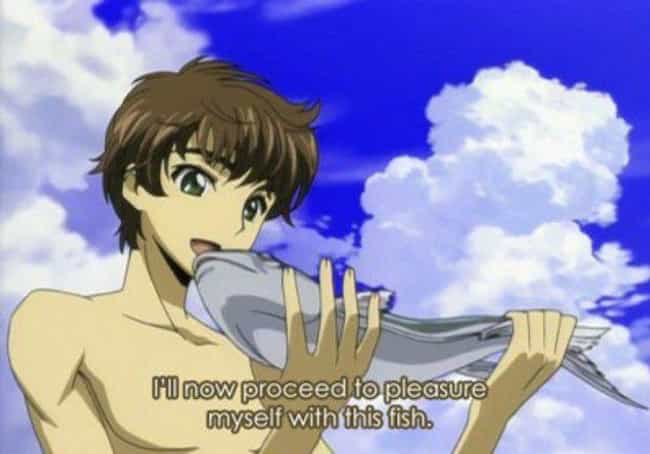 I tell you my friends, those were wild times. Incidentally, Fansubs is how I learned English in the first place. (It’s not. I wish it was, it would explain so much…)

I had the brilliant and unique adventure of watching a number of classic anime in Fansub format. Not only do you have the pleasure of trying to figure out what each line means, but you get to relish in the surprise of what the next episode would bring as there was no guarantee it would be translated by the same team.

For instance, I watched the original Breserk fansubbed and the names of the characters chaged every episode. We had Guts, Gutz, Gutto, Gatz, Hurts (I dunno), Gurd and Garry (yeah Garry!!!). Griffiths also had every possible phonetic spelling of his name as well as Griffon and being called Prince for an entire episode (not confusing at all). Once the demon names got into is and all the secondary character, I really had no idea who was who anymore.

I had to navigate that story on instinct. Since I couldn’t count on the dialogue or narrative to inform me about character’s pasts (cause names would randomly get switched between characters, especially if people were taking about someone not in the scene) or motivations, I had to figure out if I liked or trusted anyone based entirely on first impressions and what they were doing in the moment. It was a very fly by the seat of your pants experience.

And let me tell you, this constant state of uncertainty only made those big events hit me harder. I did NOT see them coming at all. There was really no way I could have…

Years later I rewatched an official translation. It’s a great show. However, part of me still cherishes those baffling episodes spent trying to figure out why a character was suddenly being referred to as someone’s son or whether this guy really had killed his entire family or is this just a mix up in the name, because everyone seems to be taking the news really chill…

However, my experience with Berserk was a walk in the park compared to the time I carelessly decided to watch the fansub of some random little show I had never heard of at all, called Serial Experiments Lain…

I mention Lain a lot. All the time. I annoy myself with how much I bring that anime up. It’s odd because I wasn’t really that impressed with it at the time. And even now, I can’t say it’s one of my favorite shows. I really like what it tried to do, I’m just not sure it did it. Yet, I act as if I’m borderline obsessed with it. That may be because the fansub of this baby almost broke my brain.

Even in the best of circumstances, Lain is a difficult story to follow. It’s delivered by a completely untrustworthy and capricious narrators, littered with plot holes and not fully realized but very high concept ideas. It tackles a cornucopia of ostentatious themes with a purposefully erratic pace. The fansub was quite simply a chef d’oeuvre.

The usual pitfalls of fansubs were all present. Character names had every possible spelling and would occasionally be Westernized. Same goes for the particular lexicon used in Lain. Words such a Wired, Navi, Cyberia, Accela , ECCO, Schumann Resonance and so on would have alternative spellings or even completely different names without warning but beyond that there was a certain magic that could only be produced by this type of show.

You see, Lain is experimental in many ways. A lot of the series is quite silent. Meaning is meant to be inferred for a sparse few lines of dialogue. Information is doled out sparingly leaving the viewers desperately grasping at straws for episodes on end before getting suddenly buried under a gargantuan exposition dump full of over complicated information and obscure references. Yeah – I really like this show.

Basically, it’s impossible to simply do a literal translation of the series and have it make any sense at all. Some amateur dubbers did do that, forcing me to try to wring some sense out of the flat story by forcefully imposing my own interpretation over absolutely everything. Better still, more ambitious ones added in their own! The first time I saw it, Serial Experiments Lain was in turn a clearly religious parable, it would occasionally celebrate technology at other times condemn it.

It was an action packed cyber mystery (and short program) without any deeper meaning when one enterprising dub group decided to throw out all the vague cryptic references and subsequently cut out all the sudden white space it left in the episodes.

One episode was even a fairly straight forward school slice of life series with some yuri undertones for good measure.

I can’t explain to you the impact of such a concentrated ball of incomprehensible mishmash has on an impressionable brain. I was completely enthralled with the weirdness of it all. Don’t get me wrong, Lain’s a pretty weird show to begin with but it’s nothing compared to my Lain. And what’s more, no one is ever going to have the same experience as me, since they’d have to watch all the exact fansubs I did in the same order.

Of course, the actual SEL is a much better series that the mismatched collection of “good tries” I watched. It’s objectively better in every way. But the abject weirdness of the SEL fansub was a completely unique experience that no longer exists. Some days, I miss those days of Russian roulette. I miss reading the manga of a series and finding out the story is just completely different. Then I remember having to wait 3 to 6 hours for a single episode to download just to find that the file is corrupted and I don’t miss them so much anymore…

38 thoughts on “The Forgotten Charms of the Fandub”

The World God Only Knows and the Dubious Divinity of 2D

Top 5 Anime Schools I Would Never Want to Attend

Back Arrow – Cowboys, Spaceships and Gods!

Since You’ve All Been Good, Here Are Some Christmas Gifs