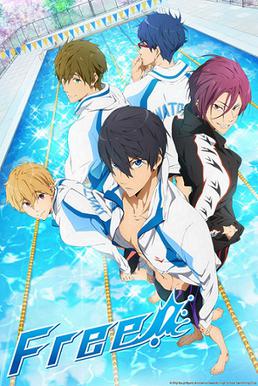 An autistic orphan, who swims real good, has to figure out a way to earn a living after he graduates high school. Meanwhile, his old friend and rival – frival – Rin, a mutant shark boy, returns to town after years abroad, stirring up old memories.

This is a Sports! Anime about pretty boys who swim and because of the nature of the sport, their uniforms are essentially tight underwear. This should have been my favourite all time anime (I am a fan of sports animes, you see), but it’s just not. Not at all, and I’ve been wracking my brain trying to figure out why.

One thing I should mention is that this is really more of a coming of age drama in both tone and narrative structure, than a traditional sports anime. Relatively little time is given to the sport itself (relatively being the operative word here, we see them swimming a lot just not as much when compared to other titles in the genre) and the sport is really only one aspect of the overall plot, rather than being the central theme. Also, I personally didn’t feel the writer’s passion for the sport like I have with other shows of this type. I realize that for some of you, this will actually be a selling point and I respect that. You’re wrong of course, but I respect your right to be wrong.

As for the cast, let me tell you, these boys are in touch with their emotional sides. They have feelings, lots of feelings. All the feelings. And they are not afraid to feel them! Look, I get that leaving high school can be a tumultuous time, especially when there are apparently zero parents around to help guide you. I understand that it can be distressing and difficult. But c’mon… yup, that’s my big argument. Fact is, I personally found a lot of the show just too melodramatic for my taste and I couldn’t relate to the characters at all. I can sympathize perfectly with being so frustrated after losing a match you’ve been training your ass off for, that you can’t help but shed a few tears. I can understand being so torn between two equally bad options that you can’t bring yourself to decide at all. I am not completely heartless, but most of the time I wanted to reach into my tv and shake someone while shouting, get over it, it’s just (insert whatever it is here…) For instance, even though I liked Rin, I have to admit that he basically acted like a lunatic the entire first season, then drastically and entirely changed personalities in second season that it was pretty hard to believe it was the same person. They didn’t even add a lobotomy scar or something like that to his character design to explain the change.

This said the show is gorgeous to look at and the animation is great. I really have nothing but praise for the technical aspects of the series. Even the outro, complete with totally irrelevant imagery and really catchy songs, is one of my favorites and I actually sat through it quite a few times just for fun. Look, if you think an ok sports anime with a dramatic penchant and a cast of attractive half naked boys, sounds pretty good…I think I just sold myself on this series. If like me, you prefer laughs over tears, then check out 50% off – it’s not quite free, get it?….

What this anime taught me about myself: I’m a bit of a jerk

Akudama Drive – I Feel Left Out

Oh! Edo Rocket is Completely Impervious to the 4th Wall