It’s Mother’s day tomorrow. As soon as I am done writing this I will start cooking. We’re going to eat a very elaborate vegetarien sautée or, if I fail, we’re gonna order Dominos, and watch a sci fi movie marathon. How about you Crow, any big plans? If you like sci fi you are welcomed to join us!

I love sci-fi! I’d love to join you, but I’m still wiped out from a trip I just got back from. I’m getting wimpy in my old age… My plans to cook my dinner tomorrow for my wife sound like yours, but I’m skipping the part where I even try to cook. I’m going straight for Dominos. Also, for the record, I guess I’m bold this week. Talk about responsibility…

For those of you that need a little refresher. Last week’s episode was a real turning point. Tanjiro is now an official Demon slayer with his own uniform and black blade. Nezuko has woken up and is adorable as ever. And together they have their first demon slaying mission in a small town that has had its young women vanishing without a trace.

The first thing I noticed is the uniform. A simple black gakuran style outfit that’s under Tanjiro’s signature kimono. It really shouldn’t have been remarkable and yet it made quite an impact on the character design. Maybe it’s just me. I might have randomly decided to attribute authority to gakuran.

I hadn’t even thought about it, but now that you mention it, it does look like a school uniform! Tanjiro looked so official in it! I liked how proud he looked — just what you’d expect from someone who had just earned the uniform!

The one aspect of the uniform that does stand out was hidden under the kimono. A bold embroidery of the word “destroy”. It strikes me that this organisation is called demon slayers and not demon hunters. A much more aggressive stance which leaves no room for mercy. Much like Buffy who you’ve brought up a few times.

Yeah, she wasn’t Buffy the Vampire Negotiator, was she? And in this episode, we got a glimpse of just what his title means…

They insisted on the significance of Tanjiro’s blade turning black once again. We didn’t actually learn anything aside from the fact that it’s so unusual, it’s seen as a bad omen. Black blade owners don’t live long enough to make a mark. Any guesses on what it really means, Crow?

Well, in a comment on our last episode’s review, Thong Do suggested it had something to do with Tanjiro’s family’s business. Just what that means I can’t guess, but Sakonji Urokodaki’s statement that most people with a black sword didn’t go far was forboding. But did you notice Tanjiro’s nonchalant reaction? I’m really liking his character!

It is finally time for the little birds to leave the nest. Tanjiro and Neuko bid farewell to Urokodaki but there’s a sense we’ll be seeing him again. I wasn’t all that worried about the old master. Rather I felt like something was a little off with Nezuko. She was more furtive than usual and the scene where she got in the box seemed almost sinister.

That uneasy feeling lingered as Nekuzo completely retreated within herself for the entire trip to the village. Did you get the same vibes I did?

I had that feeling from the first time she scuttled to the door to peek at Tanjiro in his new uniform. And when he asked her to get into the box, I’m sure you saw that under the blanket, she started to climb in, backed away, then tried again. All signs that she was uneasy or unsure of herself. That’ll mean something later — this show’s getting good about foreshadowing!

I have often said that Demon Slayer is not a very novel plot. And this episode was no different. Young virginal girls being snatched away without a trace. A lone survivor dealing with shell shock whom everyone refuses to believe. It’s been told a million times. But first, that’s not necessarily a bad thing. Stories get retold time and time again when they have something of substance that remains appealing to audiences throughout the ages. Moreover, in this case, it’s all in the execution.

Plus, it save in setup time! With a few short scenes, we’re up to speed, and the show can concentrate on what’s different about Tanjiro and Nezuko.

Hey, did you see how the demon abducted the girl from her room? The shot of her, peaceful and asleep, as the pool of blackness gathered beneath her, was terrifying! And how about that show of her trying to reach up to the real world as the demon dragged her down into its dimensions? Horrifying stuff!

We didn’t get a resolve this week but we got some pretty great looking fight scenes and another convincingly menacing looking demon. I found the teeth grinding tick particularly effective in making him stand out and seem extra creepy. For such a cartoony looking show they are quite effective at creating sinister monsters.

Taking something mundane but annoying like grinding teeth and raising it to such a psychologically disturbing level was excellent story-telling! Take the normal and twist it.

Oh and if the design and teeth thing wasn’t enough, it seems this is yet another morphed demon who can not only split himself into three distinct demons (with different personalities at that) but also sink into the ground and come out of walls. This is a lot like Buffy too. Were they would keep coming up with new powers for the vampires to keep things exciting. Technically speaking it’s not considered great writing but it is fun, so I don’t mind at at all.

The older I get, the more I think “great writing” means to keep an audience entertained. So far, so good!

In the last minutes, Nekuzo seemed to come back to herself a bit as she dominated the battle once again. Protecting both her brother and the innocent bystanders. And then we find out that her gentle, loving, pseudo father figure has brainwashed her to unquestionably fight her own kind, likely to the death.

I’m not sure how I feel about this. It may be why the earlier scenes had such an odd feel to them. Maybe the show is trying to tell me that I’m supposed to be conflicted. Again, I may be seeing something that’s not there but it seems there have been too many little touches. Shifts in the music, dimming of colors and just the way Neuko is being treated by both the plot and the camera is too deliberate to be coincidence.

I think you’re onto something here. I don’t really think that Urokodaki needed to do that; but then I recalled his warning that if she did kill humans, Tanjiro’s only option would be to kill her, then kill himself. The stakes are high for these two, so maybe a little cheating is okay?

On the other hand, what if she starts thinking of herself as primarily a demon? Would she turn on herself? Or was the brainwashing/suggestion explicit in that it targets demons who have harmed or killed humans?

But it was awesome to see Nezuko back in action!

One thing is for sure, I teared up when Nezuko was tenderly patting the survivors. Whatever else they are building up to, it’s clear that Nezuko is the unliving, unbreathing heart of the series.

It was a brief scene — but it was so effective! It was the part where the pair morphed into her memory of herself and Tanjiro that did it for me.

Through cut scenes and flashbacks, we get a glimpse of the bigger story. A tiny sliver of a revelation in the form of a name: Kibutsuji Muzan. I hope I wrote that right. Muzan is a demon that’s either old or powerful enough (or both) to potentially be able to help Nezuko. Why they would do such a thing though, is still not clear to me. However, i seems that for a little while at least, Tanjiro is going to be disposing of local demons while trying to track down this Muzan person.

I like the set up. I’m here for this. I want to see more!

Me, too. And am I the only one who thinks the short of Muzan in the OP looks like Michael Jackson? That puts an interesting twist on the villain! If he start moonwalking, I’m not sure how I’ll react!

Oh and before we sign out. Look what I found and ordered: 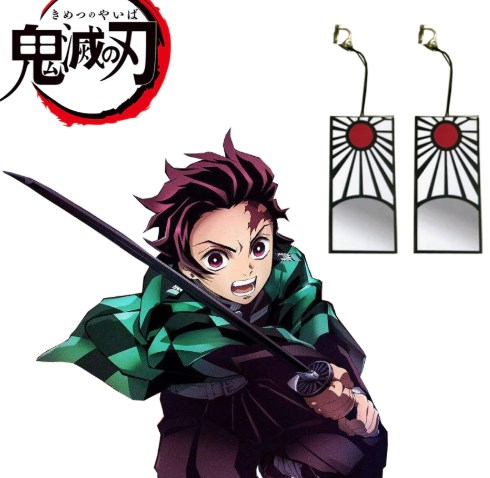 You’ll have to share pictures of the merchandise when you get it! That’ll be awesome!

Reviews of the Other Episodes

and of course – here are all the other screencaps I took!

49 thoughts on “Demon Slayer: Kimetsu no Yaiba Episode 6 – A Friend to All Humans”

A3! Spring and Summer Season

The Case Study of Vanitas ep.13 – Winter is Come

The Aquatope on White Sand – Dreams can be so Shellfish