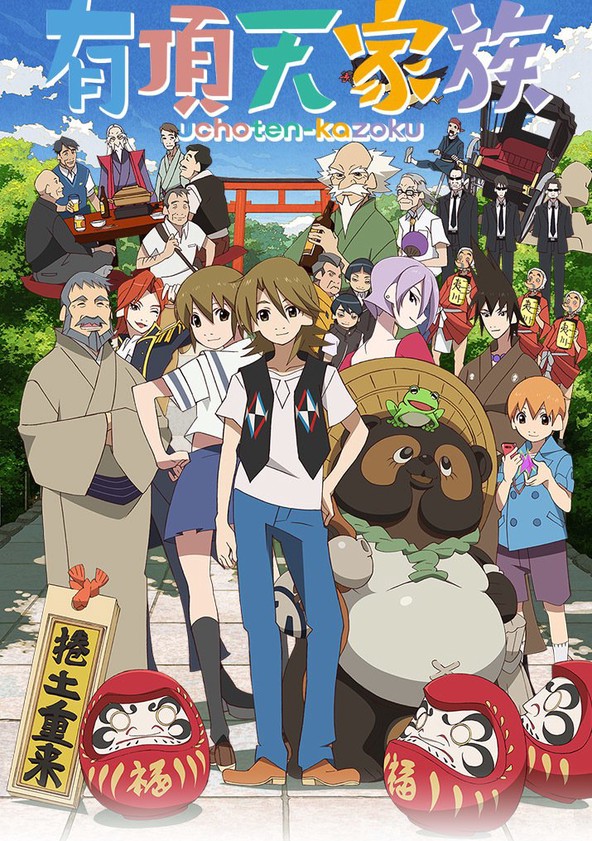 Yasaburo is a tanuki but too proud to be a mere tanuki, he admires tengu from afar and loves imitating humans and for that reason, his daily life is so dizzyingly busy, there’s no time to be bored However, as tanuki society is getting ready to choose their next leader, and the ghost of their departed father looms large over Yasaburo and his brothers, will the family be able to mend old wounds and defeat those plotting to have them boiled in a hot pot, or will their idiot blood finally bring them down. The fragile bonds that tie us to those we love most can be a painful burden or glorious salvation and sometimes, they can be both at once.

I should probably warn you right now, I have feelings about this show. Confused, frantic feelings I can’t entirely put into words. Something like a gentle ache. A squeeze of the heart. I think I’m about to cry but I just end up stretching, grinning a bit, staring out of windows all pensive like. The Eccentric Family spoke to my idiot blood and has left me a bit disheveled. I know for a fact that I can’t quite explain, but if you don’t mind putting up with me for a stretch, I’m going to try.

If I had to describe this anime in a single word, it would probably be quirky. A sort of casual absurdism permeates every aspect of the show, starting with the visuals. The backgrounds are simply stunning. Gorgeous, richly detailed watercolor depictions of Kyoto will make you long to visit the city.  Sumptuous and saturated colors pop out at you. It reminded me a bit of My Hero Academia in that regard and a lot of Tsuritama.

The character designs are unusual and striking. Because of the unconventional look of the characters, I have a feeling they are likely to be a love it or hate it sort of thing. I loved it myself, but I’ll admit the lack of detail in front facing characters took some getting use to. On the other hand, animation was exceptional, very fluid and stable while direction created some very interesting visuals through creative framing and playing with the perspective. We haven’t seen these types of visuals too frequently and they suit the story to a T. To a tea?

In line with everything else, the voice acting is generally casual and somewhat irreverent, which I adore, with quick light banter between characters favored over deeply emotional delivery. I was particularly taken with the twins’ repartee and looked forward to their appearances in large part on the strength of the voice actor performances.

I also loved the soundtrack, which carried the brunt of the atmosphere. And then there’s the OP. I watched all 13 episodes in 3 sittings and let that intro play every single time. I even listen to it to the very end when it replayed over the final credits. How can I describe it? Oh I know:

If you haven’t picked up on it yet, I loved this series. A lot. It’s up there with Humanity has Declined as a newly discovered favorite. And much like that series, it will NOT be for everyone.

As I was watching the show, one thing kept coming to mind – this is a Wes Andreson movie in anime series form. (No I haven’t seen Isle of Dogs and I won’t). It recalls Rushmore and The Royal Tenenbaums in it’s ironic and absurdist celebration of love and families and the glorious messes they create.

An affectionate depiction of dysfunction, it doesn’t shy away from showing how ridiculous and even harmful grand notions of loyalty and romance can be, yet ultimately how primordial. It calmly whispers that maybe, life and everything in it doesn’t really have a point and then gently tells us, that maybe it doesn’t need one.

Yasaburo and his family hurt each other unwittingly, they disappoint one another then agonize over their failings or push each other away. They fall in love with the wrong people. They comfort each other and sacrifice for one another. Sometimes they do things that don’t make sense, even to themselves. They are deeply flawed, and the story clearly loves them just as they are. There’s something almost personal it the casual tone of the show. Something that made me feel as though it was being told to me and only me, one on one in my comfy living room with a drink in hand.

Themes of death and loss reverberate throughout the narrative as the world seems stuck in an eternal autumn, events taking place against brilliant fall colours and scattered dead leaves. Water is ever present, from cold downpours to wild rainstorms.  From Benten’s childhood on the ocean front to the ever present Kamo river. People are constantly being thrown in water, floating along, boiled alive. Drowning their sorrows. Still waters run deep. Bridges get burned and mended. It’s all rather sad in the silliest way possible.

However, this embrace of nonsense isn’t for everyone. Certain characters remain mostly wrapped in mystery and their actions can be difficult to gauge. Benten for instance is very capricious. Some people may have a hard time accepting her seemingly random behavior and be bothered by it. As a woman who doesn’t know what she wants myself, I recognized this character all too well.

Others could be put off by what can be perceived as a lack of closure. After all the adventures, and don’t let the slice of life label fool you, there is in fact quite a bit of action happening, the story seems to go back to square one with no true change in circumstance and only a little growth for the characters. This is also something that is recognizable for Anderson fans. A fondness for arrested development.

In the end this is a deeply quirky coming of age dramedy with deep roots in family and forgiveness. It’s both grand, populated by yokai and magic and flying tearooms, exciting full of tram chases, daring escapes, betrayals and murders and yet ultimately, a very small story about a simple family trying to hold themselves together and move on after the untimely death of their patriarch, about growing up and growing old, and all the horror and wonders along the way.

And, for 13 episodes, I felt like I was part of that family. It made me happy.

Favorite character: Just about EVERYONE…. That should tell you something

What this anime taught me: As long as it’s fun it’s good.