Have you guys seen Shiki? It’s the kind of show that sticks with you. It gets under your skin and seeps into your brain. I’m not saying it’s perfect (it’s not) and it most certainly won’t be for everyone, but it’s definitely memorable. If you happen to be interested, I reviewed it last year. I was super impressed by the hairstyles. My priorities are.. creative.

It’s fair to say no one gets out unscathed from this story and in a way, those that take their ultimate exit early on are probably lucky in retrospect, considering the events of the show. So even though, I’ve broken with tradition and chosen to speak about a character that does not explicitly die during the course of the series, it may be a bit of a stretch to consider him really alive. At the very least, it’s fair to say that he wished he was dead.

Shiki is a very complex story seemingly made up mostly of moral dilemmas and ethical questions. Enervingly, the anime itself offers little in way of actual answers, leaving it entirely up to the audience to untangle the huge grey mess left behind and no one represents that moral ambivalence better than Yuuki.

As a person, he is not as developed as some other characters, having a relatively minor role to play but he is represented in a generally flattering light. And not just because he happens to be one of the most attractive designs in the show, although, considering design choices, it does come into play. Yuuki is a representation of a certain mentality, a specific ideology that gets violently challenged by the plot, (as does everything else). And in that respect, he’s absolutely fascinating and irreplaceable.

As is commonplace in modern horror, Shiki deals strongly in themes of isolation. It takes place in a cut off rural area, not that easily accessible from the more populous urban towns surrounding in. There aren’t too many people and pretty much no visitors. Technology is outdated. You don’t instantly have access to the entire world from the palm of your hand.

But beyond physical barriers, there’s a social, psychological isolation. Small town mentality reigns. Any new faces are instantly recognizable and met with suspicion. People aren’t interested in trying new things. The entire town is very set in their ways and protective of their prejudices. If you’ve ever lived in an isolated village, you know what I mean. There’s just something in the air. With the internet this is changing fast though…

Yuuki and his family are the big town counterpoint to that. With their big city background and sensibilities, they see the town as quaint, calm, a little small minded. What the locals hail as tradition and wisdom, they see as charmingly outdated. You can tell that Yuuki and his wife have a certain patronizing fondness for everything around them.

They are also pointedly depicted as free spirited intellectuals with artistic aspirations, a love for education and a detachment from organized religion and strict traditional social roles. Basically they’re hippies, and the story makes sure we know how pretty and cool they are. Mostly Yuuki as we hardly see his wife.

But for all his smartest most debonair guy in the room persona, Yuuki gets knocked down and broken at every turn.

It’s his high minded obstinate insistence on accepting the eccentricities of town folk that prevents him from noticing something’s off. In vehemently wanting to give the town a chance, he ends up putting himself and his loved ones in danger even though it would be comparatively much easier for him to relocate than the other villagers.

It’s also his education and broad perspective that prompts him to throw away any chance he had at protection, dismissing anything that sounds superstitious as old wives tales before even giving it a chance.

And yet, it’s not as if the man is pompous or close minded. His actions are perfectly rational. In fact, he is most likely to represent the audience’s actions in similar circumstances. A modern man with a good understanding of the world beyond his doorstep, who just wants what’s best for his family.

And this is why his bleak fate is so deliciously ironic. Yuuki directly challenges most of the viewers beliefs. His presence and how it contrasts with everyone else indirectly answers classic horror story riddles, such as why didn’t they just leave, why don’t they just not let the monsters in.

He looks and sounds like a hero yet he is utterly powerless to save himself or anyone he cares about. Losing his only child, abandoned by his wife, rapidly loosening his grip on reality, it’s difficult to tell whether there’s anything salvageable in the man. And the absolutely brilliant undercurrent winked at is that You, yes you, sitting in your living room staring at your laptop, YOU would have done just as badly, or even worse.

He had so many chances and squandered them all in such a reasonable way. More or less exactly as I would have.

You can almost see the malevolent grin of the narrative as it meticulously mistreats Yuuki. And it’s doubly chilling when you know it’s pointing straight at you.

In a bloodbath of a horror series, one of the very few survivors is the one best suited to represent the abject terror of the situation and he is left with absolutely nothing to show for it. I bet you didn’t even remember him. How scrumptiously grim! 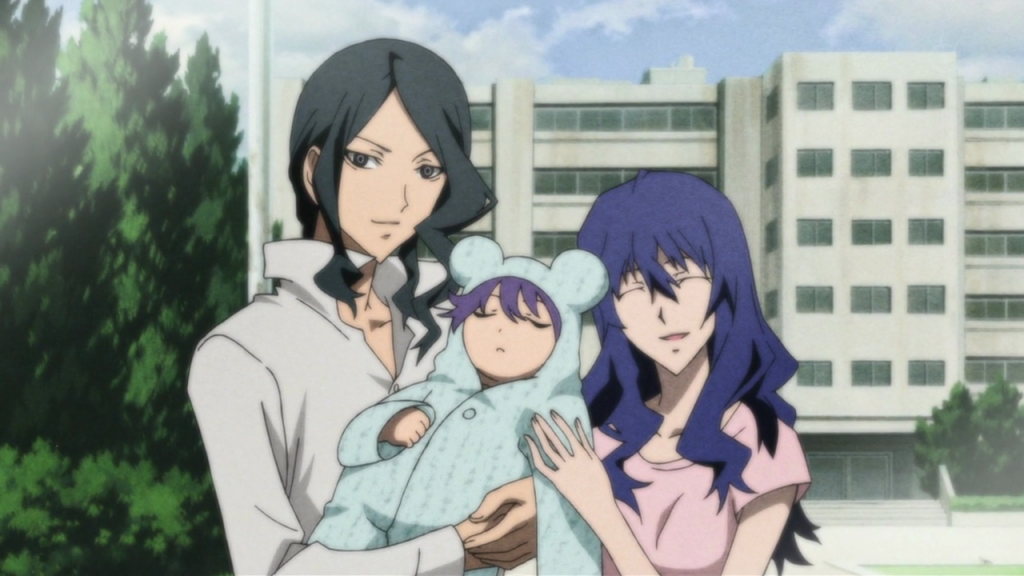 A Rare Marriage: How to Grill Our Love (Grilling for Two)

Dramatical Murders – Just How I like ‘em: Pretty and Not Too Smart

My Hero Academia s3 – The Peculiar Strength of Accepting Weakness

Yotsuiro Biyori – Come for the Tea, Stay for Everything Else

Is It Wrong to Try to Pick Up Girls in a Dungeon? III Episode 6 – A Man Named Modaka