A little while ago I asked my friend: “Twitter” whether it would be better to put together some visual novel reviews or recaps and Twitter answered: reviews fool, ain’t nobody got time for your recaps. This has left me a little ambivalent. On the one hand reviews are much shorter and easier to write. I can churn a whole bunch out in the time it would take me to put together even half a recap. On the other hand, recaps are BETTER!

See, before I even realized that writing a blog was even possible for someone like me, I had accidentally come across 4 shiki and completely fangirled. Sadly, I discovered this amazing blog about a month after that last post went up but I’ve read every single thing posted on thee, a few times. Reading through recaps of visual novels is one of my favorite ways to kill a few hours. And I find that writing them (based on the one I’ve done so far) makes me relive a lot of the enjoyment of the game and really stretches out the entertainment value.

Taking all this into consideration I bring you: Highschool Romance, a visual novel review.

In Highschool Romance you embody Shoji, a young man with a tragically alcoholic mother who apparently keeps making him change schools and now enrolled him in an all girls school. Contrived happenings. And you get to stay as a cross dressing exchange student. Well people are supposed to think you’re a girl. You’re the one with the blue hair.

From this point you’ll get the opportunity to get to know better the super hot, inappropriate aging club kid Principal before she goes to jail. Relations with high school kids is a no no.

Buxom brash jock girl Selena who loves track and field, likes to live in the moment and doesn’t believe in labels.

Or the curvy (seriously what are they feeding these girls), sexy nerd class president, with glasses (of course) and a soft spoken personality.

There isn’t really that much to it. You get a few dialogue choices along the way, not tons, which will allow you to get to know one girl better or unlock specific cgs. There is one ending per path and no bad ends. A few cgs feature underwear (obviously) and you may get the option to “spend the night” with someone but that’s as racy as it gets and the events are pretty much standard high school events.

Mechanically, the game isn’t bad. There aren’t that many options but the playtime is pretty short so you don’t end up with huge periods of nothing but reading (the horror)! The amount of cgs is respectable and the quality is decent throughout. Ultimately it’s nothing special at all gameplay wise, but everything is well implemented and smooth.

As for the acuay story, by visual novel standards this is an unusually calm and grounded story. No grand romantic gestures, no Playboy confessions or sexy descriptions of fun loving smut, no deep philosophical musings on the nature of love. I really liked that about it.

HSR has a few really great things going for it. The art is sweet and the use of colours is fantastic. The writing is dynamic, conversations flow naturally and it doesn’t get overly long. However two elements really shine.

Every featured relationship you can get into is both healthy and respectful. There’s no hint of nonconsensual activity and you get the feeling everyone would be horrified at the notion. As it is a pg game, sex is naturally treated as a secondary consideration but so is the romance itself up to a certain point. The emphasis is really on getting to know the girls around you as people, and sharing a bit about yourself. In this regard, this game is probably the closest thing to an actual dating sim I’ve ever played.

And that brings us to you, or rather to Shoji. He is truly wonderful. No wonder girls go nuts for this guy. Aside from a fairly understandable adjustment period at the beginning of the game, where you really don’t know how to wear girls clothes, you are otherwise completely ok with actively passing for a girl. There’s no mention of it being embarrassing or making you less of a guy. You don’t spend your time horndogging over the girls around you either. The game seems based on the utterly novel concept that men and women can get along perfectly fine if they just treat each other as people.

As for the girls. Well, not only are they fully capable independent young women, very much deserving of your respect, they also have their own stuff going on. Sure they like you and are interested in seeing where it could go but when you choose one, the rest aren’t exactly devastated. No one is flying into a fit of jealousy or crumbling into despair. It’s more like: “Oh cool. You guys are cute together! Well see you in class, don’t forget to bring that book you told me about”. Let’s just say that it was refreshing to see people act like, well, normal people. Obviously no one is going to be heartbroken over some dude they’ve known for a couple of weeks. *Cough, every single otome ever, cough*

All the characters are fleshed out with realistic, complete personalities and quirks, and they all end up surprisingly likable in every path, which is a rarity. It seems the authors chose to simplify character development by only including those that are absolutely necessary, there are no supporting cast at all. But that worked out well in this case. I honestly only noticed the lack of general population when it came time to write this review.

You know what they say about things that sound good to be true. I have yet to say anything negative about this game and there’s not much. It’s positive, inclusive, well made. I would enthusiastically recommend it to a still impressionable player, as the messages here are all excellent and I’m really glad I played it. But pure, subjective enjoyment factor: it was…ok.

There’s a certain appeal to the kitsch dating sim games often adopt. I like the ridiculous, overblown completely insane stories and the exaggerated characters. I like the silly soap opera set ups and the unjustified high dramatics. They’re hilarious! And, I also don’t mind the smut. This game does have romance and even clearly implied sexuality but everything is very …mature. It’s not the leering wink wink nudge nudge type of sexy. It’s the: those two emotionally stable people mutually respect and are attracted to each other and have decided to express it in a consenting physical way. Isn’t that nice. For the record, it’s very nice…but you know.  Basically it taps into a different place.

It boils down to what type of mood you’re in. When you want to see a sweet, fairly realistic, story about young Love on equal terms then pick this up. If your little sister’s been playing too many otomes and is beginning to believe that being treated like property is romantic, make her play this. If your little brother wants to learn how to be a stud, again, this is your game. If you want to forget about your long day by immersing yourself in a gorgeous ridiculous world where hordes of beautiful people are tearing each other’s hair out for your attention and every day brings its own grand gesture, then look elsewhere.

Maybe someday a game will come along that will include both respectful healthy relationships featuring fully realized balanced partners and the wacky over top zany romance with a rabidly devoted harem. That will be my all time favorite game. Maybe those things are mutually exclusive. In the meantime though, we have HSR which offers a very nice alternative to the overall insanity of dating sims.

ED – When formatting this I remembered Hustle Cat!!! It’s both nuts AND respectful. I Love Hustle Cat! 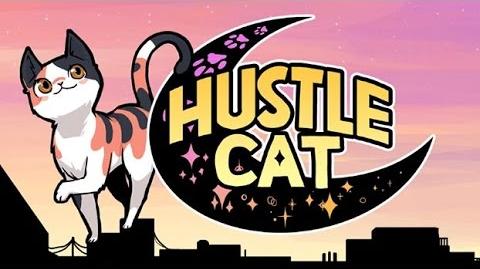 Man, I hope you guys didn’t fall asleep reading this. I’m still trying to find my footing when it comes to reviewing VNs. (I gave up on finding my footing for animes) I’m going to try a few more and maybe some recaps as well. If you hate something, let me know!

What this game taught me: Boys underwear is much simpler to wear ( I kinda knew it)

I did not drink your alcohol, I only tasted your liquor.

Heaven’s Design Team – The Devil’s in the Details

A Record of Grancrest War Ep 19 – Doucet The Terrible

My One Bad Experience with a Guest Poster