Trying to Figure out What Matters with Alice and Zouroku

Our world is constantly changing. Species go extinct to make room for new iterations. Mutations give rise to devastating predators, while humble herbivores completely destroy ecosystems through enviable reproduction. Evolution is unpredictable and uncaring but also full of wonders. And it’s this capricious faith that has created the Dreams of Alice. All over the world, people seem to be awaking to newfound and wondrous powers, for unknown reasons and at the center of it all is one little girl. At first glance a very ordinary little girl.  A capricious, boisterous and immature little girl named Sana. But what exactly is Sana and what secrets does she hold. As far as Zoukoru is concerned, it doesn’t matter.

A while ago, I went on a bit of a Magical Girl bender on my blog and my always helpful readers suggested I give Alice and Zouroku a try. My readers are geniuses. The show was already next in my cue so clearly, great minds and all that…

which one do you see me as?

Bloggers I admire, and strive to emulate, have been making a point that the rigid review structure of analyzing technical / artistic merits and following up with a general opinion is somewhat stiff and dated. I have been thinking of breaking away from that, but my retentive nature is rebelling against the chaos of creativity. I will however attempt to be a bit freer with this one.

Ed – I’m writing this after a few tries and I failed. I still kinda like this dated and stiff review. I hope you enjoy it as well.

There is something slightly nostalgic about the character designs in Alice and Zouroku. A touch of innocence that combined nicely with the storyline to keep things relatively light despite some serious themes. I quite liked it, but it made faces a bit similar and not all characters are instantly differentiable from one another.

The production is top notch, with great animation that is primordial to getting this particular story across and impressive voice acting all around. I remember being very impressed with the soundtrack in the first episode but as the series gets less atmospheric with time, it also gives less importance to the music. I have to note that there is quite a bit of CG in this show and: Grancrest – please take notes. Thank you. 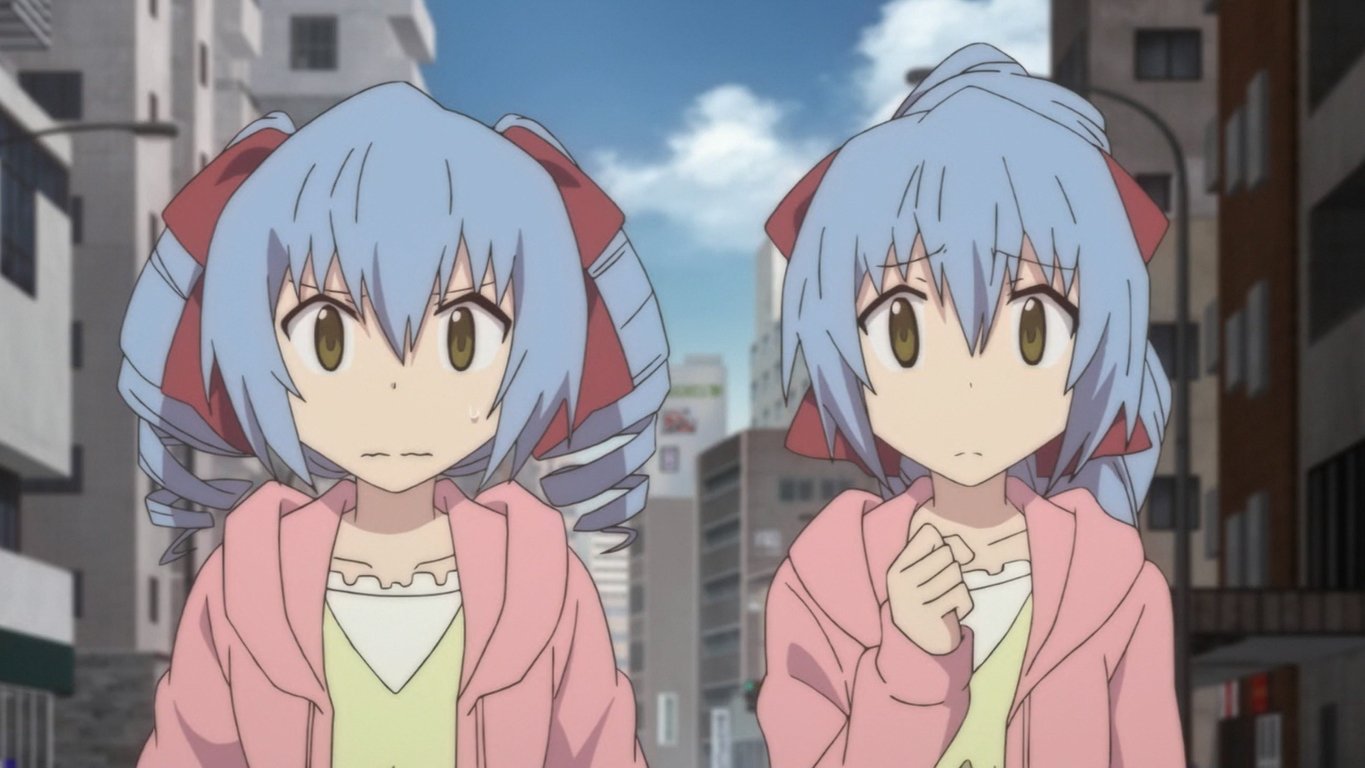 So far, this attempt at departing from the mold is really not going well, is it? OK, let’s try this.

I know people don’t like it when I compare shows but that’s how my mind works. I can’t help it. So I’m going to try to convey my experience with Alice and Zouroku by contrasting it with the shows it reminded me of.

From the very start of the series, I was hit with a wave of nostalgia for Elfen Lied. If you loved Alice and Zouroku maybe hold off on binging Elfen Lied though. These are very different works.

The parallel I saw though was in this simple illustration of how human nature instinctively reacts to the unknown. Namely: Fear! First, we’re scared, we seek to contain what we don’t understand and as soon as we calm down, we try to figure out how to use it for our own selfish means. The best of us may strive to understand it but generally speaking, it’s the pattern we adopt.

Of course, this is a very different story when told through the eyes of the subject of all this fear. And even more so when that happens to be a child with limited understanding and experience as well.

wait -she can make a small flower thingie…kill it with fire!

After all, Sana is not even a teenager yet. She has relied on the adults around her to craft her understanding of the world and is still striving to figure out what any of it means. The concept, of self, responsibility or consequences are still being put in place in her mind and she has a very limited view of the world to base herself on.

Now this powerful but innocent little girl is for the first time put into contact with the outside world and has to figure out her place within it. For a being that’s downright magical, the mundane seems impossibly unreal. As the two worlds collide, some impact will of course be felt. We have seen many times over the horrors of granting immense power to children who still see the world in simple black and white terms.

But where Elfen Lied degenerated into bloody horror, Alice and Zouroku is blessed with a cast of incredible heroes, who may not be able to make all their wishes manifest out of thin air, but who do have an amazing super power: Perspective!

For all the exciting action and intrigue, the series truly shines in it’s simple depictions of every day relationships. It’s Zouroku’s straightforwardness that saves Sana. His ability to treat her as he would any other child and accept her as she is, is a strength unmatched by anyone else. It is her foundation and the only thing that allows her to move forward. The gradual family bonds she forms with him and her ersatz older sister Sanae, were the most miraculous things in the show. I wrote down, great grandfathers make for great granddaughters – which seems confusing but I meant great in the sense of wonderful.

sometimes heroism is hard to spot

In later episodes, we see how friendship can offer up a similar salvation to another young girl lost and isolated by her powers. Once again, the heavy surreal events are tempered by quiet normal little moments that make a powerful statement and make everything else stand out.

In a show full of daring escape, magical confrontations and dazzling dreamscapes, the simple scenes of Sana sitting on a modest couch and realizing the implications of getting adopted or a shot the mailbox with her name added, are the ones that stood out for me the most.

By the end of the series, I was thinking of Serial Experiments Lain. The show had moved on from being about the events happening to Sana to being about Sana herself and the events that she puts in motion. Ideas of belonging and identity start playing a more significant role as well as the weight of expectations. The nature and rights of sentience has always been a subject of great fascination for me, so this played heavily to my preferences.

the Wonderland theme didn’t hurt either

Unfortunately, Alice and Zouroku does fall short in a few areas. The characters are great but aside from Sana, we get very little in the way of development. They are pretty much the same people at the end of the series that they were at the beginning. In a way, that’s the point but some do feel a little flat.

Some story threads, and even characters, get dropped throughout and I would have enjoyed a bit more exposition on the fantastic and/or sci fi elements. We get a superficial explanation on the government’s motives in keeping the emergence of these new powers a secret but not enough to really get invested in the conspiracy storyline. And finally, resolutions felt a bit too easy. Conflicts have a great build up with good suspense only to have everything get sorted out and workout for the best in a few minutes.

The thing is, all of these shortcomings can be explained by one questionable production decision. Essentially, Alice and Zouroku season 1 is two individual story arcs with a very heartwarming buffer episode in the middle. Both stories are detailed adventures with their own casts. It feels like two completely different seasons and if you ask me, it should have been.

The conclusion of both arcs felt rushed and unsatisfying. I spend the latter half of the season waiting to hear more about the events on the first half and wondering where some of the characters had gone, only to have the series conclude without having the chance to really explore wonderland or what was happening to Sana’s powers.

The story was constrained in too few episodes and didn’t get a chance to shine as it could have which is unfortunate as the light is clear to see. Still, it’s an uplifting series that was obviously made by a very talented team. It’s worth your time if any of the above seemed even remotely interesting.

But let’s get onto the most important thing here, why is Crunchyroll trying to make me doubt my sanity? First we have the Grancrest MiRza/MilZa fiasco now we have Zouroku becoming Zoroku halfway through the series. It should be noted that even though all the subtitles clearly say Zoroku (from episode 5 or so…not before that), the title of the series as well as the eyecatch in the middle of each episode still spells out Zouroku… You can’t miss it.

So, what’s the endgame here? Are they just doing this to me? Is Crunchy trying to have me declared insane in order to get power of attorney over me? Most of my stuff is anime anyways – it’s not like they need it. Guys promise me, when they find my body, do NOT believe the suicide note…

And what happened to the white-haired kid that drew the magic pictures? I was so sure he would be super important…

one of my favourite secens

she’s the ONLY one with anime hair

What this anime taught me: ALL Shizuku’s are super hot!

I’m not as think as you drunk I am