The Melancholy of Haruhi Suzumiya and Mine

Timelords, and espers, and aliens, Oh My! Do you ever long for a life less ordinary? For just a touch of supernatural to liven up those drab days? Haruhi Suzumiya sure does, and that’s a problem for us all. Because whether she realizes it or not, Haruhi is a girl who gets what she wants. Smart, imaginative, strong willed and beautiful, nothing can stand for very long in her way. The fact is, when she sets her mind on something, she will make it happen, even if she has to wrap  the very fabric of reality in the process. Now, if she could just figure out what it is she actually wants.

Sometimes I feel like I exist in a reality that’s only tangentially related to everyone else’s. Maybe the disconnect lies in my inability to properly perceive the world around me? I’m pretty sure it’s everyone else that’s wrong. In my world, the Melancholy of Haruhi Suzumiya is a titan, a surrealist classic that I had inexplicably failed to watch up until now due to lack of availability. Crunchyroll licensed it for Canadian distribution in November. Guess what happened. Go on, guess!

do you need a clue?

To be honest, I had believed that Haruhi was roughly the same generation as Neon Genesis Evangelion and with that in mind, I was blown away by the animation and art. It was in fact made in 2006 and there are quite a few things that date the series.

The art is actually quite nice, it has a certain traditional look to it, like it could have come from a different era but it’s certainly pretty and detailed. What’s more, it’s almost unwavering in quality which is impressive and rare even in modern offerings. The animation on the other hand doesn’t quite live up to today’s standards. They try to cover it up with dramatic music, sweeping camera movements and slight visual quirks but there’s just a ridiculous amount of still shots in this show. As much of the narration comes from the protagonist’s stream of consciousness, we regularly get second long scenes without so much as talking animation. Even in what should be high action battle scenes, the characters stand more or less motionless as speed lines and abstract colors explode around them. For what it’s worth, the distractions are well done but once you notice, it’s really hard to unsee. Sorry. However, by far the most outdated element in my opinion, is the fanservice. There’s not a ton of it but what there is completely clashes with the rest of the show and just feels awkward. You can almost hear the guy in the writer’s room saying: well we **need** to throw in some t&a somewhere…

On the plus side, the voice acting is quite good, especially when it comes to leading man and narrator Kyon, voiced by the great Tomokazu Sugita (of Gintama fame). This guy is a master of the irreverent voice coupled with surprisingly expressive intonations (also voicing my beloved alien angel Yusuke Kitagawa in Persona 5). His delivery really adds to the experience and was one of the biggest factors keeping vested in this show. 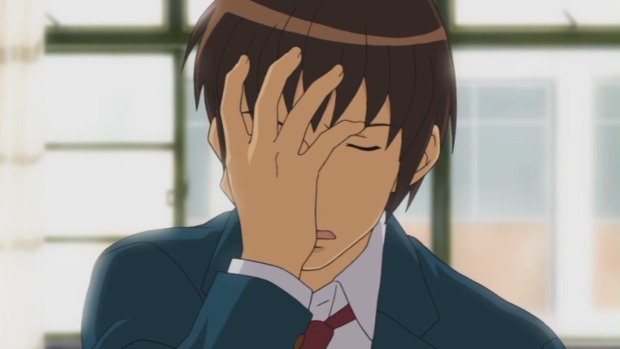 I had been hearing vague whisperings of the story of Haruhi for years. The seemingly odd disjointed mish mash of thematic elements was what had sparked my interest in the series to begin with. Not so much the actual story mind you, more the idea. A light slice of life take on existential sci-fi with theological speculations. Sounds fancy, right? The first few episodes really align with that, as new surreal characters are introduced one after the other and we slowly start to unravel the bizarre mystery of Haruhi’s existence. I could see traces of Serial Experiments Lain as the very nature of reality was present as subject to Haruhi’s unknowing whims while the supporting characters gathering around her occasionally reminded me of the cast of Neon Genesis Evangelion. You know, without the melodrama. I believe the idea was to take all these high concept philosophical/psychological sci-fi musings and meld them with a traditional student slice of life setting with just a touch of harem.

It’s a fantastic idea. Being a huge fan of genre melding animes I just couldn’t resist. Sadly, what i found was that the whole never quite came together in a cohesive way. The deep convoluted storyline promised in the first few episodes doesn’t get the development it needs to ever come to any sort of satisfying dénouement and seems to get brushed aside as the series takes on a decidedly school club feel. For instance, a rogue alien operative that is the only clear antagonist of the show, is both introduced and summarily dispatched in a single episode, allowing for some striking scenes but very little long-term impact.

On the other hand, that surreal exposition heavy part of the storyline robs us of time we would have normally spent bonding with the characters, making them seem a little too hollow to carry the series on the strengths of their personalities alone. I just couldn’t muster enough empathy for them to care about their amateur baseball game or whatever random activity of the week they chose to pursue. You can see what the creative team was aiming for but somewhere along the way, it seems they lost sight of it.

This is not to say that I didn’t like it. I did enjoy some of the episodes quite a bit. The two-part murder mystery spoof was engaging, and I was genuinely interested in finding out who dunnit and every single spec of half thought out technobabble had me taking deligent notes for future reference. But overall, I kept waiting for them to go back to the supernatural elements and they just didn’t. It left me feeling like I had watched a season of filler episodes.

This is just season one mind you and there’s clearly a lot more space for the narrative to grow. If it had never continued, I would have considered it a failure but it did have enough potential to get me interested in watching the second season. Although most of the characters are no more than pro forma archetypes for now, they are pleasant and established enough to possibly flesh out in interesting ways. They also work quite well as an ensemble cast, making their various relationships actually interesting to explore and I look forward to seeing where each of them goes. 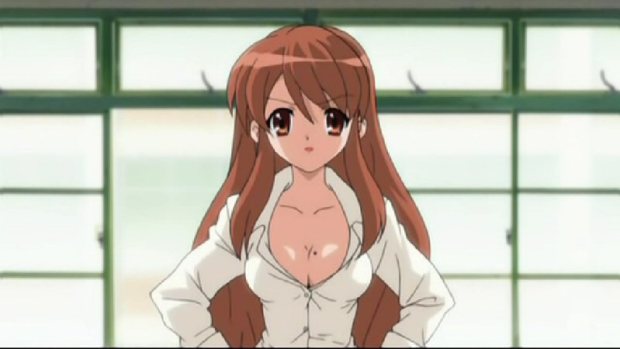 oh that how they evolve…I see…

Fittingly however, both the greatest strength and biggest weakness of the show is Haruhi herself. Haruhi is not exactly a pleasant character. Selfish, spoiled and inconsiderate, I would hate to have her as a friend. I also saw so much of myself in her. Clueless and a little insecure, Haruhi has no idea what she’s doing to the people around her and I truly believe she would be sad if she found out. Not that she would admit it. There seems to be a rich anime tradition of casting unknowing teenage girls as gods of some sort, but this is the only time I could truly relate to one. Haruhi isn’t a very good god and I would be a horrible one. Seeing an omnipotent being that’s neither malevolent nor uncaring but simply inept was an amusing concept and oddly, a little comforting. To think the powers that be are disgusted and fed up of us is sad but if they’re just bad at their job, they could get better, right? 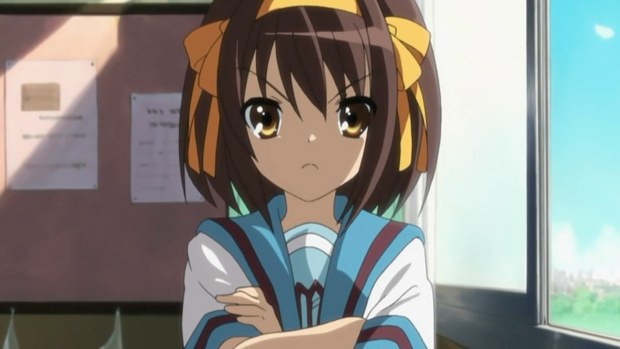 well at least give it a try

There’s a huge poetic irony at the center of The Melancholy of Haruhi Suzumiya.  Haruhi, a being potentially capable of manifesting her will and desperate for a touch of the extraordinary is the only one who doesn’t get to take part in the remarkable phenomenon happening all around her. And in the end, this is a metaphor for the season as well. We see the promise of the spectacular get shackled by the mundane and end up with mere glimpses of something astounding we can’t quite make out.

Now let’s see if that second season gives us a better picture!

I am being sober in moderation…