How much do you know about vampires? Can you list their powers? Do you know how they’re made? Can you describe legendary vampire hunter Hellsing? Wrong, wrong and wrong! Vampires, don’t turn into bats, they turn into flowing masses of nightmare fuel. They don’t care about crosses except for the snazzy fashion statement. I guess they could “turn” someone to make more but really, it’s much more efficient to create vampires using the handy dandy vamp microchip. And if you even thought that you could capture the magnificence of Integra Hellsing using any human language, then you are clearly off the mark. Let Hellsing educate you.

Man, that synopsis was even more useless than usual.. Ok guys, Hellsing is about this paramilitary organisation that protects England and the Queen, cause no one cares about prime ministers, against supernatural threats and more particularly against the emergence of an underground organisation that is creating pseudo-vampires with microchips. They also have a few vamps on their side. So why didn’t’ I just edit out that useless paragraph? I dunno guys, I’m writing this on my birthday, there may have been some celebrating…for breakfast.

Hellsing is one of those anime I had heard about for ever but I had never gotten around to watching. For some reason, I had decided that this was one of these shows that had been on air for 30 years and had an episode count in the high 3 figures. It turns out, I was also wrong! When I actually paid enough attention to catch on that it was in fact only a very fitting 13 episodes, it immediately went on my: to watch for Halloween list. 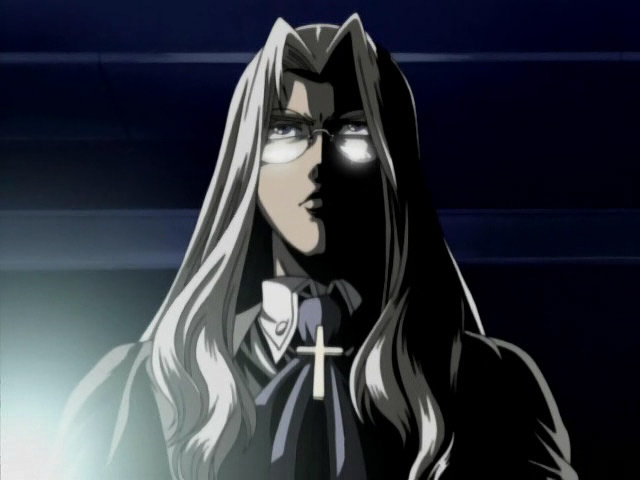 What did I just get myself into?

To understand where I’m coming from with this “review”, it might be helpful to understand that I really, really thought I knew exactly what Hellsing was before even starting it. I remain as reality challenged as always.

Visually, Hellsing is very recognizable. I’m sure you’ve seen images from the show at some point and the characters are probably familiar to you whether you’ve watched the series or not. This is because, in all honesty, Hellsing benefits from some truly excellent designs. Ok, maybe a little corny but memorable, detailed and quite different from one character to the next. Everyone here has completely distinct facial structure and body type, it is impossible to mistake two characters. In fact, Sera’s extremely cutesy design (which also acts as gap moe), with her adorably huge eyes and tiny mouth, considerably limit the range of her facial expressions while Integra’s much more delicate and elongated design, allow for subtle narrowings of the eyes or furrowing of the brow to clearly and very obviously convey her state of mind. This sort of shift from one character to the next not only further individualizes the designs but also contributes in defining each player’s personality. Seras is the generally innocent ingenue, she is more or less constantly bewildered by the events around her but she remains positive and helpful. Her almost ubiquitous wide eyed optimistic expression is completely in line with who she is. On the other had, someone like Commander Fergenson, whose grizzled but kind looking design leads to a variety of expression from cheerfully relaxed to menacingly tense but always with a sort of underlying fatigue and fatherly compassion. He basically owes half of his character definition to those facial expressions. I’m saying the designs are good.

see, you can tell what she’s thinking…

I remember watching the first episode and being genuinely impressed by the quality of the art. I did think it had been made in the 80s though… I still kinda think that. And the art is impressive at its best. Unfortunately it’s also exceedingly inconsistent. The very limited palette of richly saturated colors gets randomly shifted for no real reason other than oopsies. A particular flat shade of red gets used as hamfisted symbolism throughout the series but gets switch out to a slightly more orange version for a couple of scenes and that will drive some of us crazy. It’s possible those of us were already a little crazy. And designs get so mangle with angles or distance that characters can get occasionally difficult to recognize. Let me stress again that at its best though, the art is very good.

The rest of the production values may be starting to show their age a little, for the record this was made in 2001 not 1980 like I thought, but are all still serviceable. This is a completely personal thing, but I really enjoyed the opening, the song was fun and the super goth imagery was something I would have adored in high school.

The story is, well what I described. It sort of resembles a gritty organised crime drama with a supernatural twist. Episodes follow various operations of the Hellsing organisation as they try to hunt down the forces responsible for the new wave of vampire incidents in London. I think I got the 80s vibe partly from the fact that, aside from vampire creating microchips (which look like spiders…it’s awesome you guys), the entire story is very light on technology. No smartphones, no cameras, not even any computers to speak of. You want to talk to someone, you have to use a telephone(?) God it might as well had been set in victorian times. This creates an odd dissonance that immediately dates the show and makes the time period very unclear (to me). It also forces the action to slow down a little and adds artificial obstacles to situations. Honestly, if you could just text Arucard, everything would be solved in 5 minutes.

There’s really not much more to it than that and if you do any sort of nitpicking you quickly realize that the narrative foundation is rather shaky. In many ways I thought of this as a predecessor for Black Butler. In tone, that is. The stories and fanservice are completely different but there’s that same campy, silly bloodsoaked fun sense to it. This is not your deeply introspective, existential horror of your Shikis, this is a lighthearted comedy drenched in pretty much all the blood everywhere. Yeah, it’s super gory. You can’t really get mad at this show for just forgetting about major antagonist (Anderson) or failing to justify the rationale behind the core relationship of the series, because it presents itself in such a delightfully frivolous way that you end up being the one feeling silly for asking.

For all it’s triviality thought, the show did occasionally touch on some depressingly current issues. In episode 3, a man turns his gay lover into a vampire as they believe it is the only way they can hope to share any kind of “life” together. Both characters are immediately dispatched and no actual commentary is offered. There was really no need to put that detail in at all but the fact that someone did was a clear and intentional attempt to, at the very least, acknowledge the reality of gay rights at the time. Similarly, Seras, an extremely capable senior officer, is publicly harassed by her superior officer to no repercussions whatsoever and that character is shown to be an otherwise honorable and accomplished guy. We get little hints about class inequality, church politics and even some very oblique references to racism. All of this is in blink and you miss it moments that refrain for any true analysis but I was still impressed someone decided to add them in at all. 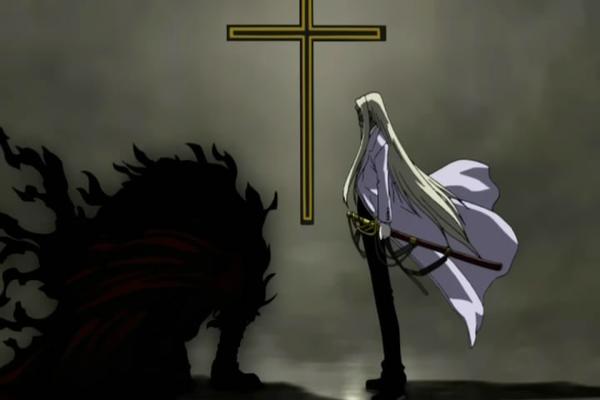 but let’s get to what matters

I hope I didn’t give you the wrong idea. Seras is a deer in headlights ingenue type but she is also boss. In fact out of the three main characters, two are ladies and both are fantastic. Great examples of very human and undeniably powerful heroines. Seras does some ridiculous balancing act managing to be a completely convincing lost puppy dog and rabid wolf all at once. I was worried that she might be too adorable for her own good, and my own stomach, but she showed me big time.

Ok…I think I’ve beat around the bush long enough. We’re all friends here, we can talk right? Guys, I’m in love. Forget everything I’ve ever said, Integra is the only lady for me. I’m sorry if I’ve shocked you. What you had figured it out you say? Because I’ve only used pictures of her? But I was being so subtle! Integra just …gwahh. Her back story is adorable if not particularly logical. Her character is in many ways a shonen hero, with ridiculous single-minded determination but there’s a subtle corruption of the morality here. Bitter experience and the weight of responsibility have forced Integra to grow beyond the naive hero archetype still embodied by Seras, and become something much more complex and interesting.

TL:DR I don’t blame you, I don’t know how it got this long. It’s because I ramble on forever and now I’m destroying the entire purpose of a tl:dr …fine! Hellsing is not exactly a great show but it is a solid and fun show. So fun in fact that I went straight into Hellsing Ultimate. I’ll tell you all about it, soon.

Random thought: Arucard mentions that his name is an anagram except the subbing is phonetic. It’s supposed to be Alucard to make any sense….

Favorite character: I’m sure you won’t even need all 3 guesses.

What this show taught me: Vampires have no junk (serously, I now know that)

Take me down to the bar! We’ll drink breakfast together!

Suggested drink: The Count of Żubrowka