As a sister post to yesterday’s Shiki, today let’s talk about blood. Cause…it’s scary(?) Just humor me. I’ve been doing this for like 3 months, I’m out of ideas.

Maybe you’ve noticed that a lot of character bios include their blood type. This is a little strange for westerners because we don’t really consider that relevant information about a person unless we need a transfusion. However, in many East Asian countries, a person’s ABO blood type is believed to be predictive of a person’s personality, temperament, and compatibility with others. A bit like Zodiac signs. As such, this information is really there to tell about what that character is supposed to be like but you’ll only get something useful out of it if you know what each type is associated with.

If you get why this is here – you win!

Let’s start with a little background. The idea of associating personality traits to blood types is said to have originated with Furukawa Takeji in 1927. As a school professor, he studied the behavior of his students for many years and eventually theorized that humans could be divided into two basic personality types which he then associated with the blood types A and B through statistical compiling. There was a pretty horribly racist motivation behind the whole thing but thankfully, it’s been mostly forgotten. He published his findings in a paper called “The Study of Temperament Through Blood Type” which appeared in the journal Psychological Research. The original paper was quite the rage at the time but eventually started fading from public consciousness until 1971 when reporter Masahiko Nomi expanded on Furukawa’s theories in a bestselling series of book, “Understanding Compatibility from Blood Types.” These books included theories for all blood types and associated these not only with basic personality traits but with compatibility, potential for academic success and so forth.

The books proved so popular that his son eventually founded “Ketsueki-gata Ningen-gaku Kenkyusho,” the Institute of Blood Type Humanics, which continued to advance and popularize the theories.

Arguably, the scientific community has certain…issues

The belief in blood type personalities is slowly fading again but it is still very well know in Asian cultures. For example, blood types are so important in South Korea that there is a film called My Boyfriend Is Type B in which a girl is advised not to date a man because of his blood type. The Korean webcomic A Simple Thinking About Blood Type depicts the stereotypes of each blood type, and has been adapted as the anime Ketsuekigata-kun! 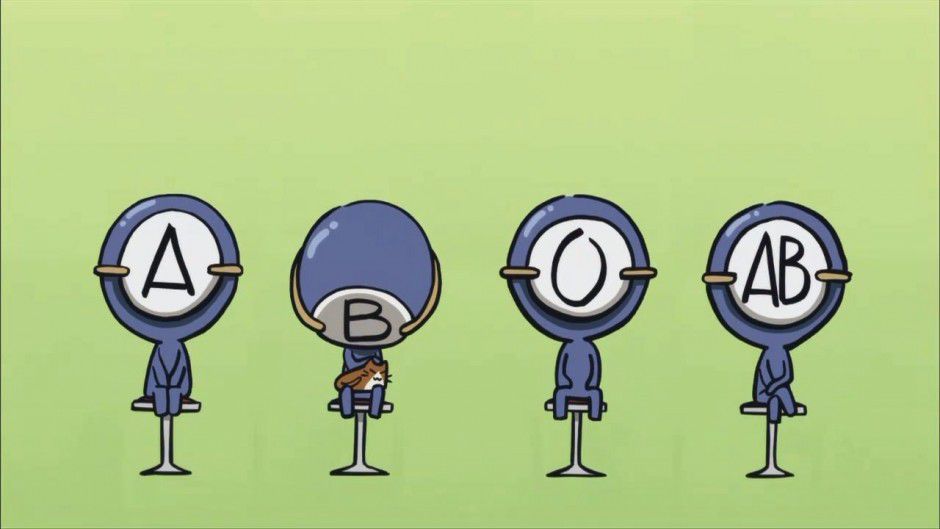 You probably would really like to get to the good part now. What exactly are the blood type personalities:

Try and wrap your minds around this one, but people with blood type A tend to have “type A” personalities! Weird, I know. These guys are your cool and collected types. They stay calm and try to think through problems. They’re also kind and patient, caring for those around them and striving to do their best at all time.

Of course, their reliable nature can turn on them as well. They can worry too much, or sacrificing themselves needlessly and as a result become shy and sometimes withdrawn. They are polite and often popular but remain self-conscious. They can also manifest a certain perfectionism and if there is a job to be done, they prefer to take care of it themselves. However, they will never hesitate to help others.

At their best, these characters are earnest, sensible, patient, responsible and cautious.

At their worst they are fastidious, over-earnest, proud, stubborn, tense, mischievous, obsessive and pessimistic.

Some A types you may know are: Hinata Hyuga and Haruno Sakura from Naruto, Tetsuya Kuroko from KnB, Sawada Tsunayoshi from KHR, Katsuki Bakugo and Tenya Iida from MHA, Tuxedo Mask, Sailor Mercury and Sailor Pluto from Sailor Moon.

For some reason type B are called the most practical of the blood groups. They’re the relaxed, friendly types. They also work twice as hard as everyone else to achieve their goals. Basically, all your classic shonen heroes. They tend to be less than cooperative, as they like to follow their own rules and their own ideas. Because they are very individualistic and energetic, they can come off as impulsive.

On the flip side, the free spirit aspect can make them disorganized and occasionally self-centered. Their drive can also lead to a certain aggressivity and irreverence in their personalities but their heart is in the right place. Just like everything else they do, when they love, they LOVE. No half measures here.

At their best, these characters are passionate, active, creative, intelligent, flexible, cheerful, friendly and optimistic.

At their worst they are irresponsible, forgetful, selfish, lazy, impatient, unreliable and uncooperative.

Some B types you may know are: Naruto from well, Naruto, Sagara Sanosuke from Kenshin, Aomine Daiki from KnB, Gokudera Hayato from KHR, Shota Aizawa and Froppy from MHA, and Sailor Venus from Sailor Moon.

They also have great hair

Types Os seem the best to me. Not only are they universal donors, which I imagine must come in real handy for their friends (especially in those fighting animes), but are also outgoing, energetic and social. Everybody’s best friend.

They’re also your determinators. Stubborn and single minded, they can come off as a bit dumb or simple. On top of that, if we’re not taking on a goal they’ve set their minds on and will therefore never ever give up, they’re kind of unreliable. Abandoning projects as soon as they lose interest.

O types always say what’s on their mind. They value the opinion of others and like to be the center of attention. Also, people with O blood are extremely self-confident. They can get a bit too confident in fact making them prone to temper tantrums.

At their best, these characters are confident, self-determined, ambitious, strong-willed, intuitive, agreeable, competitive and athletic.

At their worst they are unpredictable, spiteful, self-centered, cold, aggressive, arrogant, envious and ruthless.

Some O types you may know are: Gon from HxH, Natsu Dragneel from FT, Yachiru from Bleach, Izuku Midoriya and Shoto Todoroki from MHA and Sailor Moon

Gosh, these two get shipped together a lot!

These guys are nuts. Well actually, they’re supposed to be a mix of types A and B. So they can be shy AND outgoing, switching from one to the other. Or dependable and helpful but only when it suits their needs.  Like type As, they can be withdrawn to the point of becoming anti-social. Then again, like type Bs, they can form fast friendships easily and get possessive.

AB is considered the worst blood type, in predictability-loving Japan. Because of their somewhat dual nature they are regarded with suspicion. They also play by their own rules. For these reasons, they are often portrayed as villains. For a while, some companies tried dividing their employees into work groups based on blood type, and no one wanted to work with the AB group.

At their best, these characters are cool, controlled, rational, sociable, intelligent and adaptable.

At their worst they are critical, indecisive, unforgiving, two-faced, aloof and crazy.

Some AB types you may know are: Sasuke Uchiha and Gaara from Naruto, Kenshin from Ruroni Kenshin, Hibari Kyoya from KHR, Imayoshi Shoichi from KnB,  Endeavor from MHA and Sailor Mars from sailor moon.

And just for fun, here are the compatibility ratings:

A is most compatible with A and AB.

B is most compatible with B and AB.

O is most compatible with O and AB.

Of course, my blood type is AB but you’ve all probably guessed that. But onto the important stuff. How do we turn this into a drinking game?

Suggested drink: Bloody Mary (cause apparently no one outside Canada knows what a Cesar is)