Drifters – What LOTR was missing 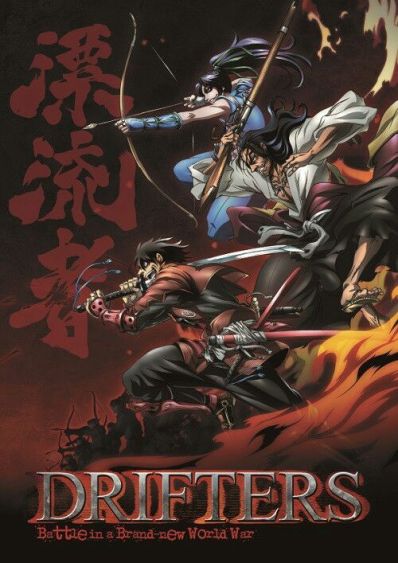 Try to imagine a world populated with not only humans but goblins, dragons, elves, dwarves, hobbits and a myriad of fantastical creatures. A world where magic is real and wonders roam the land. Where each species has developed their own cultures and worships and languages. And in this world, a dark force has arisen. A mysterious and incredibly powerful mage seems to be uniting the once oppressed non-human races (called monsters by some), and slowly making a bid for nothing short of world domination. A force so formidable indeed that it can even conjure up a gigantic eye in the sky to survey the land. I know it’s difficult but are you picturing it? Ok, now take that picture and throw in a bunch of actual historical figures like Oda Nobunaga, Jeanne d’Arc and Hitler. Still good? All righty now, imagine some of those random historical figures got to bring a piece of equipment with them, like a Gatling gun or an aircraft carrier. Wait, did it just break? Let’s start over then…

Man, this was quite the ride! Why didn’t anyone tell me about this show sooner? Cause I have no friends who could have told me about it? Well, yeah, that’s probably right but you could have found a nicer way to say it…

it could be worse

First let me say that this show is striking in every possible sense of the word. It is a visually stunning spectacle geared towards immediate and lasting impact. The designs are unconventional, opting for some still unquestionably pretty prototypes but less cute than, well pretty much everything I’ve been watching lately. Maybe that’s more on me though. Everything is in super high contrast. Harsh shadows outline and define shapes and actual rough hatching is occasionally used. Complementary colors are strung together without any gradients or transition shades to harmonize the effect. All of this, creates images that seem to jump at you. Additionally, characters and most objects have very strong outlines. It took me a while to really put my finger on it but it looks as if the outlines were rendered with a “fountain pen” or “G pen effect”. The lines get thicker and thinner with curbs. This is not only very interesting as far as the artwork goes but it also changes the way movement appears. And boy is there a lot of movement. The generous amount of animation tends to proceed at an almost unwaveringly frantic pace and is impressively fluid in every scene. A talented voice acting cast rounds off the stellar technical merits of this title. It is unique looking and some may find it a bit too aggressive (we’ll get back to that 😉) but that was clearly the intent and there is no disputing the quality of the work.

Maybe one or even two of you picked up on what I was trying to say in that summary. It’s the Lord of the Rings with time travelers, that’s what I was saying. Sometimes I’m too subtle for my own good. Indeed, a lot of the background is eerily similar which in my opinion was a smart move. Most of us are familiar with one form or another of that story, so despite how singular the show is, it feels just a little familiar and doesn’t require bucket loads of exposition to avoid losing the audience. This said, once you get past the setting, the story is completely different. Told from the point of view of the drifters in question (displaced real world historical figures), we follow these martial time travelers (all of which were more or less considered soldiers or fighters) as they adapt and immediately do the only thing they know how – conquer. If anything, the overall feel of this anime was most like the old Berserk series but with a sense of humor. A pitch black downright aphotic humor positively soaked in blood. I thought it was rather funny!

of course my humor is super sophisticated

The characters start out a bit stiff but slowly get developed throughout the season. There are some ways to go mind you but all of them have shown both complexity and potential for growth that will be interesting to watch in future seasons. The fact that so many characters are based on actual historical figures and discuss real world events can be tricky to incorporate into a high fantasy setting but it’s been done rather smartly here. We are given only tiny nuggets of information on the backgrounds of individuals so that those of us who are not particularly interested in history don’t have it rammed down our throats, while those of us who are can easily read up on it by ourselves. Guess which group I belong to. I was pleasantly surprised to see that what information we are given tends to be pretty faithful to the known facts. Except that’s just not how you make saltpeter. You need a medium that’s a little dryer – too much fat and the oils get in the way… I cannot unknow that folks…

it haunts my dreams

This one isn’t for the kids or the faint of heart or the fragile of stomachs. I mean one of my drinking cues is decapitation and most of us could get blackout drunk using that one only. This show is graphic and doesn’t mercifully look away at the last minute or conduct its less savory affairs offscreen like a proper gentleman. Drifters ain’t here to coddle our precious little sensibilities. Drifters is a punch in the face and violence is part of the story, in some ways it’s the point or at least, the moral.

some parts were a bit less funny

Similarly, the show isn’t the least bit interested in catering to our need for some sort of established code of ethics. Moral high ground belongs to whoever can stand on that pebble at the bottom of a filthy ditch the longest. This show gives us antagonists who count Jeanne d’Arc, Anastasia Romanov AND Grigori Rasputin among their numbers and protagonists that include Adolf Hitler (thankfully gone by the time the story begins but you still get the idea). With entire armies full of heroes on both sides, there is not a single good guy to be found. There is a conversation to be had about the inherent morality of war. It’s a complicated and interesting discussion. Drifters is not having this discussion. The series bypasses the very notion of morality by either stripping it completely away, or soiling it beyond recognition.

what we have to learn a lesson?!?

For instance, the obvious Big Bad – the Dark King (for h’s sake, he’s called the Dark King) spends most of the show as a menacing and unyielding presence who is also generally benevolent. He is unifying the oppressed races in an attempt to create a world in which all can live free and equal even after he is gone. He is ridding the world of humans only because they refuse to share this ideal and to be fair humans have been shown to be pretty vile jerks up to that point. So really, he was left with no other option but the eliminate a race of dangerous savages who adamantly refuse to peacefully coexist with anyone else (sounds about right). It’s only in the last few episodes that we are really shown how cruel his uncompromising nature can be. His methods are highly questionable but his motives remain apparently noble. On the other hand, the protagonist can hardly claim any righteous upper hand tactics wise. Nobunaga is clearly a genius. He is also a pragmatist with little time for abstract concepts of nobility or justice. An “end justifies the means” sort of guy, who is not only not above fighting dirty but considers it stupid to not take advantage of every possible trick in the book. The guerrilla warfare tactics he comes up with are occasionally difficult to watch but man are they interesting. While Yoshi seems off-put by the more brutal attacks and Toyo is surprisingly soft hearted, consistently getting enraged by what he perceives as injustice, both are completely dedicated to Nobu and happily follow his lead out of their own free will. 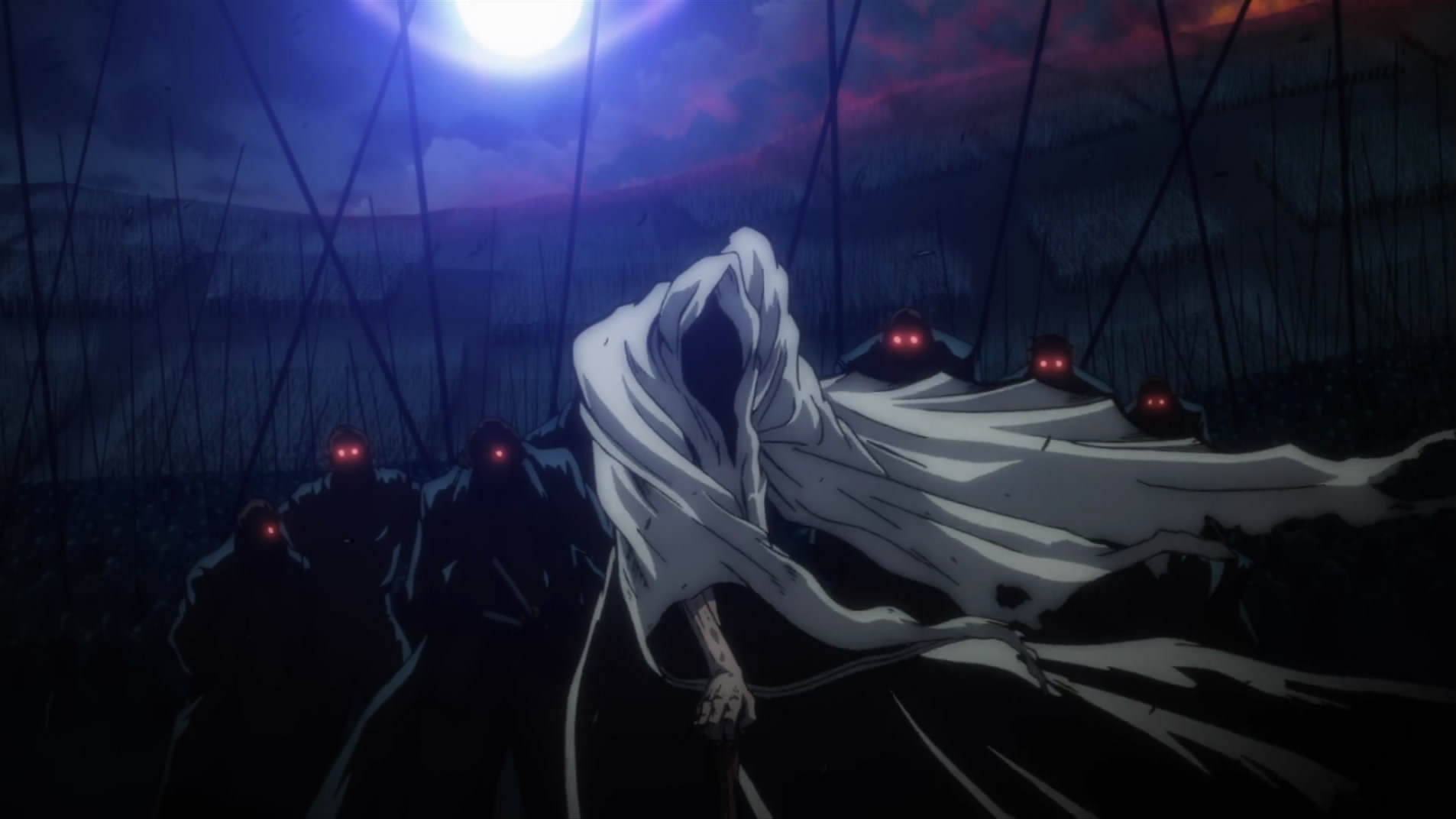 I got a bit carried away again, let me try and resume this. It’s a bloody show that does not take itself seriously at all and is beautifully rendered. You need a good stomach and a taste for the darker and occasionally crasser humor to really enjoy. I really enjoyed it! The one drawback it that season 1 is very clearly an introduction. I will be very mad if season 2 never gets made. Very!

I hadn’t put a pic of Yoichi

What this anime taught me: A lot about famous historical Japanese battles….If you guys want to hear about it, let me know.

A man who exposes himself when he is intoxicated, has not the art of getting drunk