A young man with questionable tastes in hair styles gets thrown into the world of professional Go players after getting possessed by the spirit of an Ancient go master that had been bound to his grandfather’s Go board.

Go is a sport! Sports anime are a particular subgenre which usually play by their own rules (hah) and have their own tropes. I, myself, am quite fond of the genre. Generally, they are variations of coming of age stories where the main character discovers themselves and starts to form lifelong bonds with the people around them through a particular sport. They revolve around themes of teamwork and camaraderie and the responsibility one has towards their teammates. In this regard, Hikaru somewhat breaks the mold.

Yes I’m sure! Blonde fringe and cut the rest short!

First, since Go is generally solitary (even when played 3 versus 3 each game is essentially individual) the importance of teammates is rather moot when compared to most other sports. You do get to train and practice with other players but as they risk becoming your opponents in the very next game, any alliance formed is temporary at best. As such, the series really emphasizes more the rivalries between players and how a worthy adversary can drive you to become better. Since Hikaru himself is something of a fish out of water in the Go world. Starting way behind everyone else and being a generally happy go lucky sort that clashes with the highly structure world of competitive go, he is even more driven to prove himself and be recognized by his opponents. 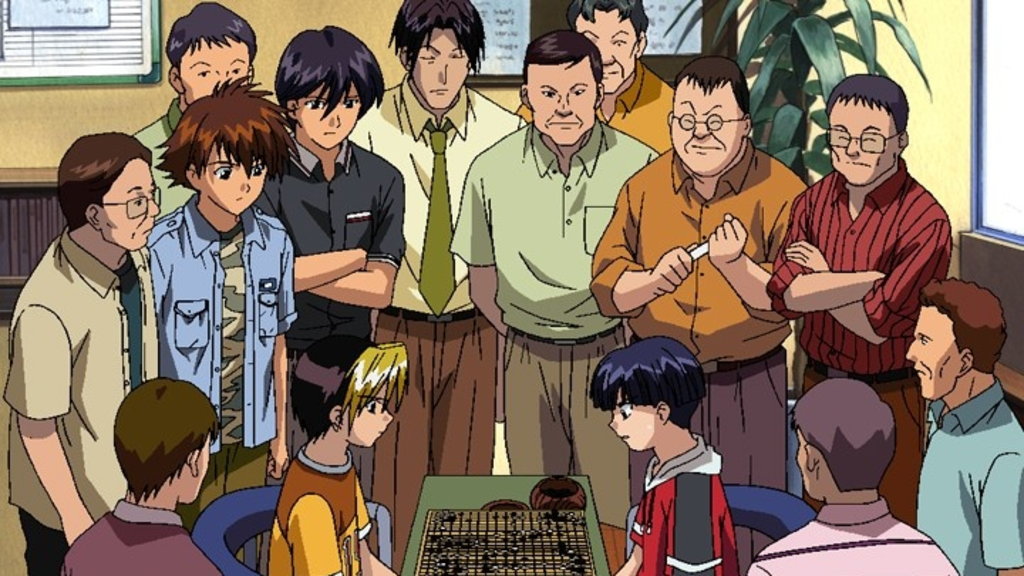 Another standby of sports animes is the trainer – trainee dynamic. In this, Hikaru once again goes against the grain. Rather than being respectful or in awe of Sai’s obvious mastery of the game. Hikaru is completely irreverent and treats his teacher as more of a nuisance than an honored master. Of course, Sai himself is a rather unusual mentor, often childish and selfish he is not the sort to put his student’s needs first to gain his respect. The series touches on a particular aspect of the teacher-student relationship that I have never really seen explored in anime. When Hikaru’s natural talent for Go becomes evident, Sai is openly and obviously jealous. The series makes it clear the he has some difficulty coming to proper grasp with the situation and it’s not entirely clear if he ever truly does. I assume that this sort of thing must come up fairly regularly since coaches are often ex-players they must feel at least a little frustrated when young prodigies are offered opportunities they never had. Unfortunately, the show doesn’t dwell much on this but the fact that it was brought up at all is still very interesting. I hope this aspect gets explored more in future titles.

Hikaru’s world is a little sparsely inhabited. We see his grandfather occasionally and his mom in passing but Hikaru might as well be an orphan for all the involvement his parents seem to have in his life. I know this isn’t special but you got to keep in mind that since Sai is a ghost, to the outside world Hikaru is a lonely kid who spends 80% of his time alone talking to himself…

I also can’t help but feel that there was a missed opportunity here to get some gender diversity. As one of the very few “sports” were the genders aren’t segregated, it would have been fairly easy to include a lady player in either an ally or rival role. This would have been highly unusual and made Hikaru no Go even more unique. But you know.. cooties.

I have always believed that a sports anime can be judged by how much it makes you care about the sport itself. After Kuroko, I added pickup basketball games to my weekly workouts. Because of Haikyuu, I know exactly what a libero is, how and why the position was added and its strategic impact on the game. Possibly, most impressive of all, Ace of Diamond made me sit through an entire baseball game – several in fact. I still don’t believe it myself. I saw Hikaru before any of those animes and because of it I actually learned how to play Go. I took lessons and joined a club and everything. I still play regularly. Of course it helps that Go is a genuinely fascinating game but the anime did a great job of conveying the passion and joy of playing Go. In the end, what more can you possibly ask for?

What this anime taught me about myself: I suck at Go.